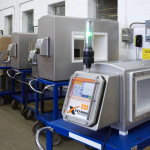 A sprawling 160-acre quarry in York, Pa., is home to one of the world’s largest reserves of dolomite used in refractory and dolomitic products for lime, steel and cement. Magnesita Refractories has operated this mine since 1950 and processes more than 60,000 metric tons per month of this important mineral, composed of calcium magnesium carbonate.

When the aggregate is extracted in raw form, it contains numerous amounts of ferrous and nonferrous metal fragments, enough to shut down expensive crushing equipment and cause innumerable downtime situations. The solution for Magnesita was to install an Eriez Model SE-7520 Self-Cleaning Suspended Electromagnet for tramp iron removal, and an Eriez Model 1250 E-l Metal Detector for additional ferrous and non-ferrous metal removal, providing an effective “double-team” contaminant removal process, according to John Dixon, Magnesita project engineer.

Product technicians from Eriez and from its local area sales representative agency, PennQuip Inc., in tandem with a design and engineering team from Kemper Equipment, helped Magnesita select, install and test the equipment over a period of six months. The result is that Magnesita has produced higher quality materials by achieving greater ferrous and non-ferrous metal removal than with previous equipment the company used.

Magnesita, a Brazilian company, operates 28 industrial and mining units, 16 of them in Brazil, three in Germany, three in China, two in France, one each in Belgium, Taiwan, Argentina and the United States. Total refractory production capacity is more than 1.4 million tpy. Magnesita is the third largest producer of refractory products in the world and a leader in integrated solutions with refractory products.

The York facility is particularly important because of the large, high-quality dolomite reserves extracted from that quarry. In fact, Magnesita maintains an extensive research and development center at this facility (the other is in Germany) to meet the needs of the iron and steel industry.

According to Dixon, the process to approach the Eriez team began in 2013 when expensive crushers were being damaged by undetected tramp metal. “The trigger for this project was the fact we spent nearly $750,000 on three crusher repairs for several years and had to find a way to prevent that from happening in the future,” he said. “We called Eriez and Kemper and asked for a solution.”

The first phase was choosing and installing the proper metal detector. Magnesita established several benchmarks and provided metal test cubes to ensure that the Eriez Model 1250 E-l Metal Detector with 10-in. opening, would perform to specifications.

The test cubes included 5/8-in. ferrous, 1.25-in. stainless steel and 1.25-in. manganese. A “performance guarantee” was included in the contract, meaning if the metal detector did not perform at the quarry as specified during a one-month commissioning phase, then Eriez and Kemper would remove the detector with a full refund.

Once in-house testing at Eriez was complete, the metal detector was installed in March 2014 and passed all performance tests the following month, according to Dixon. “Our old metal detector was outside the tunnel of the quarry, so we were getting false trips due to CB radios and handheld walkie talkies,” he said. “Even when we moved the old detector inside the tunnel, we were still getting interference. Eriez made a lot of recommendations to stop the false trips with the new unit.”

The new metal detector–located inside the tunnel–is on the 30-in. wide #5 conveyor belt at an incline of 30 degrees with a feed rate of 380 tph. The belt travels at 540 ft. per minute. Eriez recommended a flag marker system where a flag drops onto the belt within 24-in. of either side of the tramp metal detected. After the flag drops, the conveyor coasts to a stop for quick metal removal.

Once officials at Magnesita were satisfied with the metal detector, the next phase was based on another Eriez recommendation, which involved the company’s Model SE-7520 Self-Cleaning Suspended Electromagnet. The unit is located above ground on the 36-in. wide Q7 conveyor belt, about 100 yd. from the metal detector, according to Dixon. The Eriez electromagnet unit was installed in October 2014.

Magnesita was using an older manual cleaning style, permanent suspended magnet. The newer Eriez electromagnetic unit operates at a much higher efficiency. This self-cleaning electromagnet has field strength 2.5 times stronger than the older permanent magnet at the same cross-belt 10-in. suspension height.

“Our older permanent magnet had enough strength to pull ferrous off the top of the burden surface, but it could not pull up the imbedded material,” Dixon recalled. “Also, it was not a self-cleaning model, so material would accumulate on the magnet and require manual cleaning. We really needed a more powerful magnet to prevent any kind of tramp metal from going into our two crushers.”

“The Eriez SE magnet has the ability to pull out metal with greater force than our previous unit,” Dixon said. “The self-cleaning function has eliminated man hours to physically clean the magnet and the belt, which runs 390 ft. per minute.” Tramp metal removed by the Eriez SE magnet is discharged into a hopper installed on a concrete pad.

“Since we installed the Eriez Metal Detector and Suspended Electromagnet, we have had no crushers rebuilt because of tramp metal,” said Dixon. “We gave Eriez and Kemper the thresholds we could not exceed in terms of maximum particle size, so we were confident the equipment would work once all the testing was complete.”

Dan Sheakley, operations manager for Kemper, said the successful outcome was achieved by testing the equipment in stages and monitoring results. “We created performance goals with the metal detector first, then went to stage two with the suspended magnet,” Sheakley said. “The end goal was to protect the equipment downstream throughout the plant.”

“We can often do capacity guarantees, based on the type of equipment and application, but the performance guarantee on the metal detector was a unique situation” Sheakley said. “Since we knew Eriez had a testing facility to ensure the unit would operate correctly once installed at Magnesita, our ability to provide this type of guarantee was much easier. Concerning the SE magnet, Eriez customized the magnet to assure that the separated ferrous material would stay on the self-cleaning belt before being discharged into the hopper. It was a team effort.”

Information for this article courtesy of Eriez.